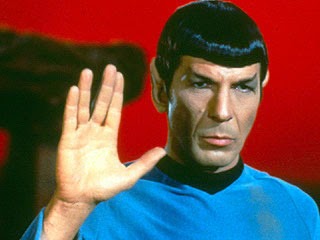 Very sad to hear of the passing of Leonard Nimoy.

Born in Boston, Nimoy made the move to Hollywood where he landed the role of science officer Spock in the classic Star Trek series from the 1960s.  He spent the better part of a decade trying to distance himself from the character before finally embracing it with the big budget films.
Nimoy was also a photographer and artist.

The new movies recast the series characters, and to me its like watching a bunch of kids playing dress up.
There will never be another Spock.