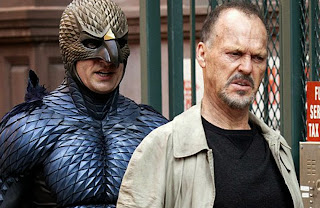 If you've not heard of BIRDMAN you will-- it's got OSCAR written all over it.  Michael Keaton stars as a middle aged movie star who wants to be taken seriously but all his fans want him to do is to play the iconic superhero he played in a series of blockbuster film franchises; Birdman.

Keaton's performance is beyond riveting-- and the only thing I'll say about it other than that is I was working on virtually the same concept so now I have to shelve it.  But if you're interested go to the Harvard Book Store and get a copy of their comics anthology they put out last year and you can read my opening chapter of THE CAPTAIN.

When Keaton was cast as Batman back in 1988 fans were outraged, they felt he was too small, too comedic, too un-Batman like, and he proved them all wrong.   The reality is Keaton is one of the legitimate tough guys in Hollywood (and mostly because he actually lives in Montana because he can't be bothered with Hollywood types).  Just ask the reporter who was stupid enough to compare his career to that of the actor in the film-- Keaton told him to "take the higher road."

Check out BIRDMAN-- it's brilliant.