Your Dysfunctional Family. I'm a part of it too. 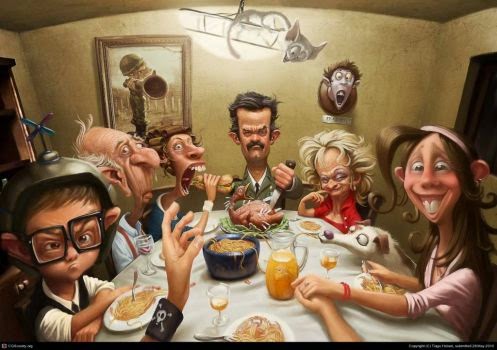 Look at this dysfunctional family.
We have a Dad who is trying to control spending in the house, but focused on the personal liberties of things like same sex marriage and a woman's right to choose.  The Mom spends wildly-- want to take a vacation?  Let's do it!  And we'll put it on the credit card and figure out how we're going to pay for it later.

We also do things like pay $70 for a gallon of milk every week because, well, we have a long term contract with this certain milk company and even though we can get a gallon for $5 from another source, we keep on paying the $70.

That ridiculous overspending might not be so bad if we were rolling in dough.  We're not.  In fact, our credit cards are maxed out and we continue to spend MUCH more than we earn.  Worse, we give money to the members of our family who choose not to work, who chose to do poorly in school, who chose a life destined for poverty, we give them money because, hey, that's fair right?


That wouldn't even be so bad except we ALSO send money to cousins and second cousins and third cousins who also either chose not to elevate themselves to a better standard of living.  Many of them because the heads of those households steal all the money we send and give nothing to anyone living in the house, causing rampant poverty and hopelessness among those houses.

Even that wouldn't be so bad but we give money to our neighbors too.  Because we have a nicer house than they do.  We don't have any money but we keep on giving it away.


How about this one?  When there's trouble in the neighborhood we don't call the Police.  We opt to give our sons and daughters rifles and send them in to straighten it out.  Sometimes they call for help and ask us for support, but we can only send them in with limited resources and limited rules of behavior.  Sometimes some of them don't come back, but we continue to do it.

On the outside, our house is one of the nicest on the block, but if you look inside you'd find quite a bit of needed repairs.  Trouble is we can't agree how to repair them, and because we do things like spend $70 on a gallon of milk and give money to non-working relatives and neighbors who are "less fortunate" than us and send our sons and daughters to act as the neighborhood police force AND spend more than we make we can't afford those repairs anyway.

Sure would make more sense to put the money into our own garden then keep sending money to the neighbors down the street wouldn't it?

Be nice to cut off those family members, cousins, neighbors and even people who don't like us and put that money back into our own accounts wouldn't it?

That Dysfunctional family is the United States of America.  It's the Congress, the Senate and the White House.  All of which are currently occupied by no one who acts like a grown up.

Next election, let's try something different.  Let's listen to ideas rather than talking points.  Let's focus on what's REALLY important-- like putting our own house in order, and let's vote based on the QUALIFICATIONS of the candidate rather than how cool they seem, or how much they agree with our crazy religious, social or morale attitudes.
Let's elect people who are grown ups.