Photo above taken from Paul's great blog-- which details a lot of great business advice.
MY LIFE WITH COMICS  << Check it out AFTER you read my story.

That's Entertainment was Worcester's second comic book shop and it opened up in a  little building on the corner of Chandler and Queen Street run by a young man in his twenties named Paul Howley.  In the thirty years since, Paul and I have become good friends and I look forward to my annual visit with him and his lovely wife Mal in North Carolina when I'm in town for Heroes Con.

Paul's shop was probably not much bigger than thirty or forty feet wide by thirty feet deep, but it had row after row of back issue comic books and most importantly, on the way behind the register it had Paul's display books-- books that were either rare or valuable (or both) or maybe they just had eye appeal, but regardless I used to ride my bike the six or seven mile ride at least once a week.  Sometimes if I'd had a particularly lucrative week shoveling sidewalks I might go a couple of times a week and occasionally even multiple times in a single day.

At the time I was buying mostly new comics but I'd occasionally pick up an old Batman comic book from the 60s which is an era known as the Silver Age in the world of comics.  Back issue comics in those days ran about $5-$10 ea while a new comic book was probably around $1.

In the days before the internet if you collected old comics you often didn't see what the cover looked as you'd read through a list in the newspaper COMICS BUYERS GUIDE that would often only list titles and condition of books, so opening the package was always a surprise.

Because of that I would always enjoy seeing the comics Paul would have up on his display.  Unlike the other comic book store in the city at the time, Paul would change up the display often to keep it fresh. 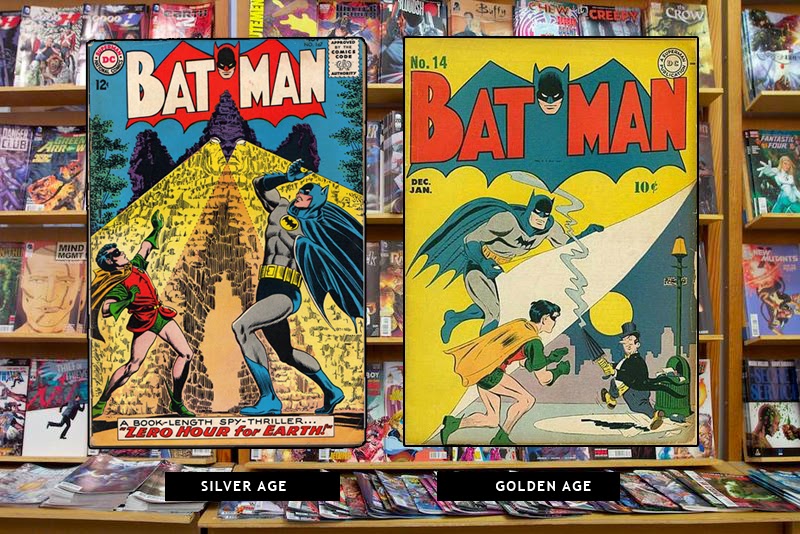 So one day checking out and chatting with Paul I noticed a book behind the counter that was a lot bigger than even the silver age comics I'd bought-- which themselves were bigger than the comics being published at the time.

It was a striking book with Batman and Robin on a yellow background peeling back the page to reveal The Penguin underneath.

It was more the size of a magazine.

"What's that?" I asked casually, expecting him to tell me it was a coloring book or some of the other countless merchandise released during the heyday of the Batman TV show.

"Oh this?" Paul said in his always cheerful manner.  "It's a Golden Age Comic Book-- it's a Batman #14."  Still smiling, still obliging he took the book down and handed it to me.   I'm a 12 or 13 year old kid standing there with my mouth hanging open.

It was a Batman comic book from World War II-- 1942 to be more precise.   As a kid I was a big WWII buff-- and I knew every bit of history, was fascinated by the movies of the time and here was a book that would have been sitting on the newstands during that time period.   Some forty years later it's sitting in my hands.

I was flooded by the history of it, enamored with the size of it, overwhelmed by the smell of it-- you other fans of old comic books know the smell.

FIFTY dollars is a million when you're a kid.

I held it in my hands for a minute, protected by it's plastic sleeve.

I refused, there was no way I could handle this gem.  But he did it for me and he flipped through the pages so I could see the artwork.

While I grew up in the 70s I was familiar with Golden Age Batman stories because of the reprints they would often do.

One of my favorites was this one: 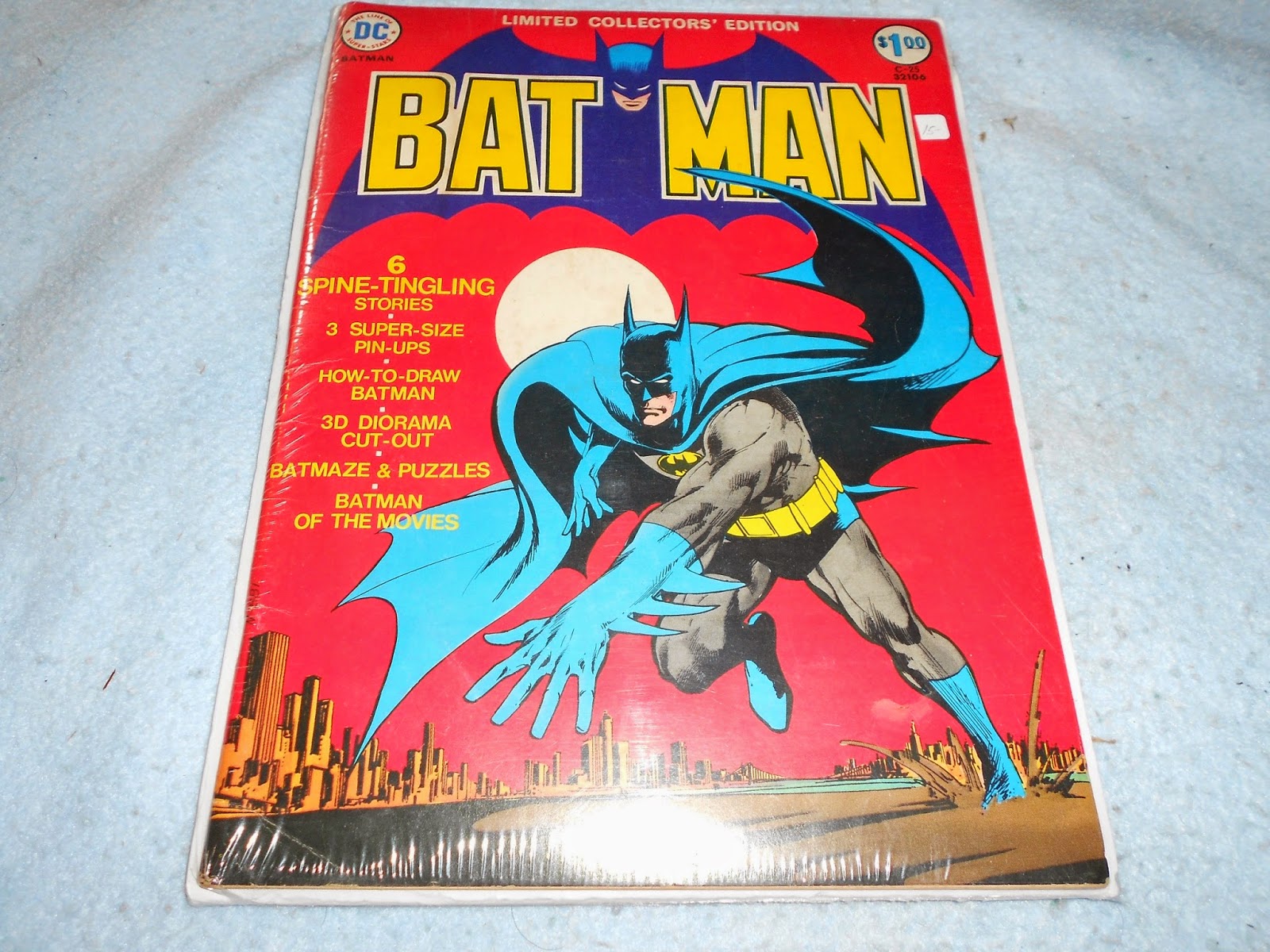 Batman Limited Edition Collector's Edition C25-- it was tabloid size (11x17) and it reprinted some great stories from the years before including one called THE CASE BATMAN FAILED TO SOLVE-- in that adventure from the 1940s-- Batman was called to a convention of the world's greatest detectives and during a lecture the lead detective himself is murdered and these detectives, including Charlie Chan, The Thin Man and others, have to solve the crime.

I read and re-read that story over and over again through the summer of 1974.  I loved that book.

As Paul flipped through the Batman 14 this page appeared: 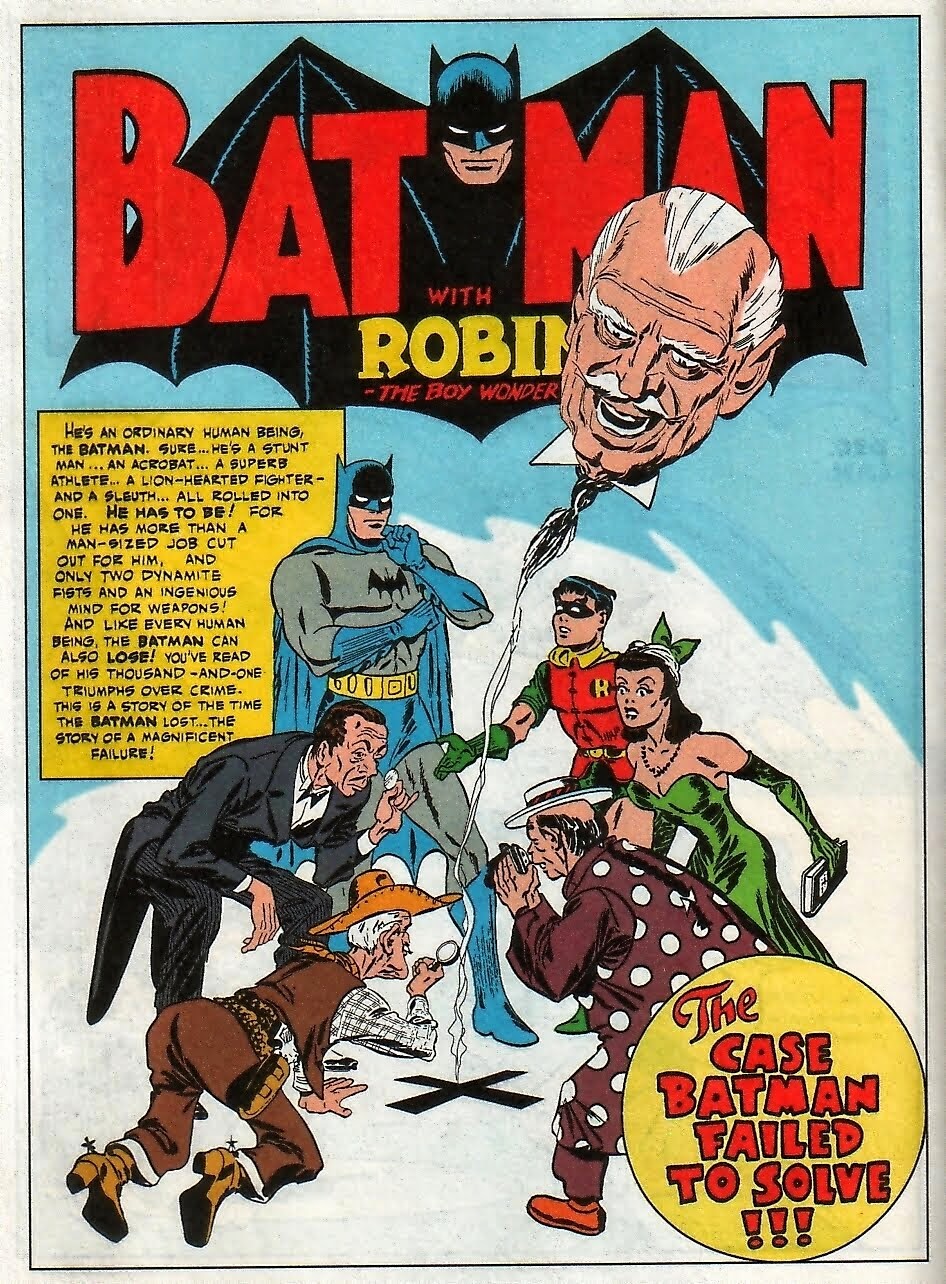 The Case Batman Failed to Solve-- right there in the book it was originally published in.  (someday I'll tell the story of how I stalked the artist of this page to get him to autograph it for me)

It made the book even more amazing.

So I stood there, Paul likely gave me a lesson on Golden Age Comics, on grading comics, on collecting, but what he NEVER did was try to sell me.  Never dangled it in front of me.  Instead he often tried to talk me out of it.   Fifty Dollars was a lot of money to a kid after all.

He took it and put it back on the display, telling me if I really wanted it I should think about it, and I shouldn't worry because a book that expensive would probably be around a long time.

I don't remember for sure the time of year, but I do know my rides home were in the dark.  I visited that book often, and when I wasn't visiting it I was spending my time thinking about it.

This went on for at least three weeks.  I'd get to the store and the first thing I'd do is look at the book, and Paul was always patient with me taking it down to show me, indulging me in my endless browsing.

I began saving for it, doing extra odd jobs to make some money.  I finally raised the $50 and rode off to buy it.  I re-enforced my weathered old messenger bag that I used each week to buy comics with heavy pieces of cardboard to ensure the 14 would be safe on the journey home.

I got there and hurriedly chained my bike to a pole and ran inside clutching the money in my hand.  Paul was there working as he always was-- and it always struck me how bright and colorful the store was when you came in from the darkness outside.  I glanced behind the register to the display rack;

The book wasn't there.

I'm sure I played it as if it was no big deal.  Even in those days,  I would not have showed my feelings.  I reconciled myself to the idea that I still had the $50.   I'm sure I probably bought something, but I don't remember.  I do know the ride home was the longest, darkest ride I've ever ridden, and the snow that had started to fall melted instantly as it struck my cheeks.

A few more weeks passed and every time I walked in I still glanced at the display rack,  hoping against hope that somehow the book would reappear.  There were other copies in the world after all, and there was always the chance that the buyer would return it.  But it was not to be.

Christmas Eve is when my extended family celebrates the holiday-- my aunt and cousins would come over and without fail this aunt always gave me great presents.  Sometimes it was art supplies, this particular year it was several VHS tapes of classic movies including a Bob Hope comedy called MY FAVORITE BRUNETTE which I watched over and over again-- in fact to this day I re-watch the movie around Christmas.

Christmas morning was when my family would open presents and as I opened mine I came to one that was in a wide flat box-- a sweater or dress shirt I imagined, but yes dear readers as you suspect, I opened this package, parted the gift paper and sitting there in the box was BATMAN 14.

My parents had called or stopped by the store and asked Paul if there was anything I was pining for in an effort to find me something for Xmas.  I was easy to buy for-- you'd ask me what I wanted, I would grumble "nothing"-- how can you go wrong?

The first Golden Age Book I ever saw, and one I will never forget.