I Know Some Dumb People....

...I'm talking mouth breathing dumb.
People who you can actually observe the mechanisms of their brains as they try to decide whether to turn to the right or the left.

Some of these people are in positions of power,  but for those of you outraged by these strange happenstances I assure you-- the devil always gets his due.  You can only fake smart for so long.   You can only hide incompetence for so long.

One of the joys of the internet for me is to find these people writing reviews on sites like AMAZON.  I like Amazon a lot-- I USED to love them but lately my orders have been arriving damaged-- amazingly fast shipping is great but if the product is smashed or dented then that negates the benefit completely.   Amazon is sometimes it's own worst enemy. 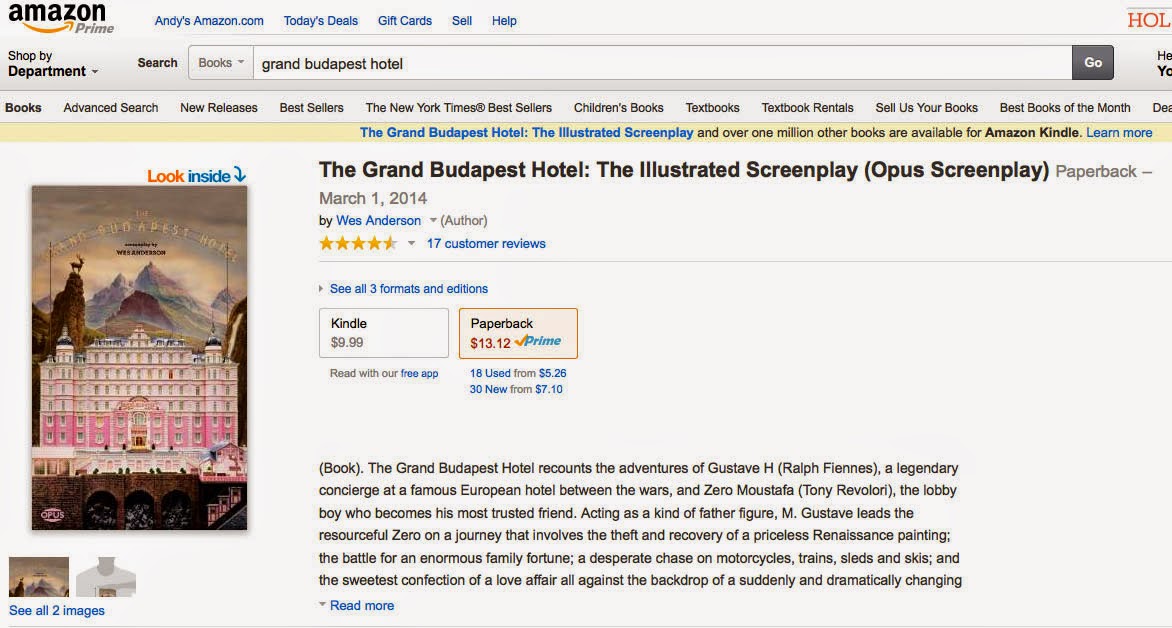 GRAND BUDAPEST HOTEL: THE ILLUSTRATED SCREENPLAY
Now if you've not seen this yet I implore you to do so if you are a fan of quirky action adventure murder mysteries.  I'm not a Wes Anderson Zombie, I thought RUSHMORE was good, but most of his other films are vastly over-rated by a populace starved for actual creative accomplishments.

GRAND BUDAPEST lives up to the hype with a stellar cast,  perfect casting and a plot that is so fast paced you'll find yourself sitting on the edge of the couch waiting for the next turn.  I loved it but the review is for another day, we're focusing on idiots.

One of the primary reasons I choose Amazon over a brick and mortar retailer is because you have the luxury of several real people reviews.  It's as if you walked up to the hand held vacuum section at Best Buy and there are fifteen people gathered all around you offering you opinions on which is the best choice and why.  In the past I've often bought something and then been disappointed by the choice.  It's also difficult in shopping for something like a hand held vacuum and being faced with thirty six choices in the aisle.

The reviews help me to make an informed choice.   But staying with this real world analogy imagine you're in that aisle and you're being counseled by those same fifteen people but one of them looks like they haven't bathed in years and the other has his jacket on inside out and he's breathing through his mouth  (yes a mouth breather).

Would you listen to those people?  No you likely would not.  Me?  I'm nowhere near as nice as you are, while no one would accuse me of impoliteness or an inability to compose myself in a social situation neither would they accuse me of being ridiculously nice.  I would likely tell the two morons in the circle to step away.

So here are some of the reviews of this particular book:

FIVE STARS.   This sort of writing or film is rare for these days. The film is remarkable in every single way and by reading the adapted screenpaly (trust me, the working ones do not look like this) one gets much more in-depth view of the miraculous Roald Dahl like characters, the situation and the clear link to reality. This is a work of art.

If you enjoyed this film, you will appreciate this book. It includes photographs- superfluous- but also sketches for original costume designs and a beautifully written set of forwards.

See?  That's what I'm looking for.
Why do I want to buy this book?  Kudos sir for a well written review.

How about the person with the inside-out jacket?

ONE STAR.   Maybe it is my fault but I thought I was buying an actual book. What I got was a Film Script. Two pages in to the "book" and I gave up.

Maybe I will revisit the website to see how large the print is stating that it is a film script.

Now to be fair, this may very well be a good solid person, and one can often miss something in the description.  I myself recently bought a Blu Ray of a popular TV series not realizing there was one set that HAD the UV Digital Copies and one set that didn't-- for the same price.  My bad.  Would that make me give that Blu Ray release ONE STAR?  No.  The Blu is solid.   My fault for not reading the description more closely.  To my defense, I would have had to look for something that WASN'T THERE, namely THIS INCLUDES THE UV DIGITAL COPY CODE.

But it in no way detracts from the product, so to give it one star based on MY mistake would be unfair to the producers of the Blu and in this case, the publishers of this book.

Citing their review, yup it IS your fault-- the title of the book is THE ILLUSTRATED SCREENPLAY-- what part of that did you miss?  Did you not know a screenplay was a film script?

Back to the hand held vacuum, I was looking for a good one.  One that actually worked.  I want it for quick cleanups around the house AND to keep the interior of my car clean (I'm psycho like that).  I found one in the form of the Eureka EasyClean Corded Hand-Held Vacuum, 71B

The product description lists it as weighing 7lbs.  SEVEN pounds.

A gallon of milk weighs in at 8.6 pounds.  Does that surprise you?  It sure as hell surprised me.   I know it's heavy but I didn't know it was that heavy.   So picture vacuuming with a gallon of milk that's 3/4 full-- gonna get heavy after a while.

But I don't consider that a deal breaker because I want one that works, i.e. it needs to have a powerful motor.

How about the reviews?  Most are stellar, but how about Mr Inside Out?

This despite the fact that the description clearly stated it weighs 7 lbs.  There is no wool being pulled over your eyes by the manufacturer.

These are far from the worst offenders, but as you peruse reviews take into account what the person is writing and how it actually affects the product you're ordering.
Posted by Andy Fish at 10:21 AM